Parents: How To Pick Out The Right Colour For Your Child's Room

Our living environment (e.g. lighting, colour, furnishing) plays a strong role in determining things like our mood, behaviour and well-being. This definitely applies to children as well, who might even be more sensitive to such factors in their living environment. Several studies that have been published in recent years have suggested that children are particularly sensitive to the colours that are present in their living environment, which has resulted in various psychologists stressing the importance of choosing the right colours for your child's bedroom. Here's a quick overview of some of the most popular colours chosen for kids' bedrooms as well as their potential effects on children: 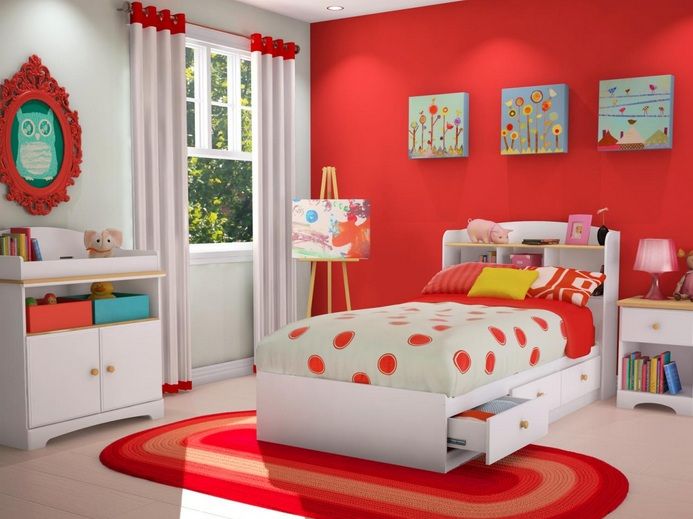 Red has long been established as a stimulating colour that can serve to energise our body and excite our minds. For some people, red can also help to increase focus. However, research suggests that overexposure to red could actually encourage aggressive behaviour and contrary to popular belief, it might actually distract, rather than help to increase focus.

This certainly doesn't mean that you need to remove all traces of red in your child's room. Instead, rather than painting all the walls red, you could use it as an accent colour in the room, to balance out some of the cooler colours. It could also be used as an accent piece, to add a splash of colour, without being overwhelming and over-stimulating. 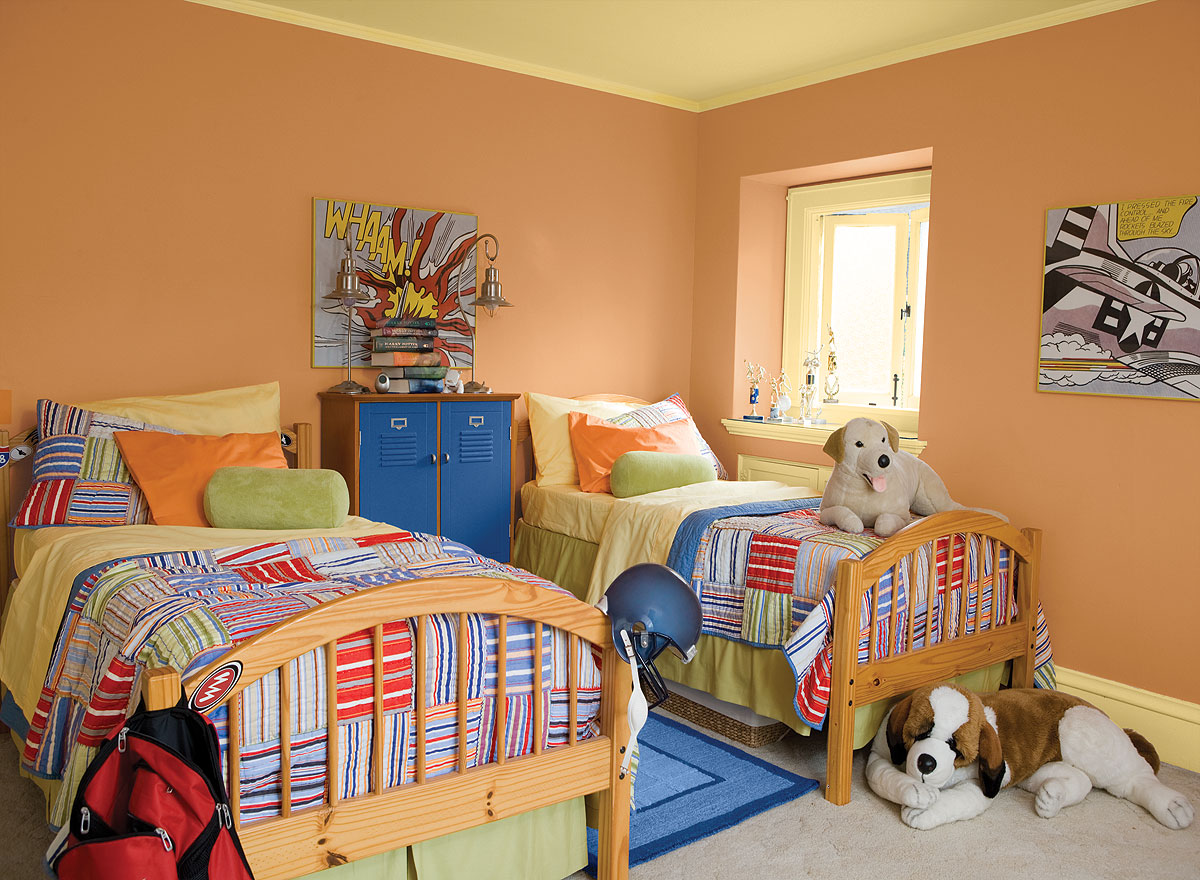 Despite being a colour that's not always within the top choices for wall colours, orange is actually a colour that has been exhibited to encourage confidence, extroversion and independence in children. It has also been found to create a sense of ease amongst children, encouraging better communication and cooperation.

However, just like red, too much orange can be overstimulating, and could potentially have the reverse effect of causing your child to be irritable and unfriendly. Thus, similar to red, it'd be best to use orange as an accent colour, rather than as the colour scheme for the whole room. You might also want to opt for softer shades or orange, to prevent it from being overly stimulating. 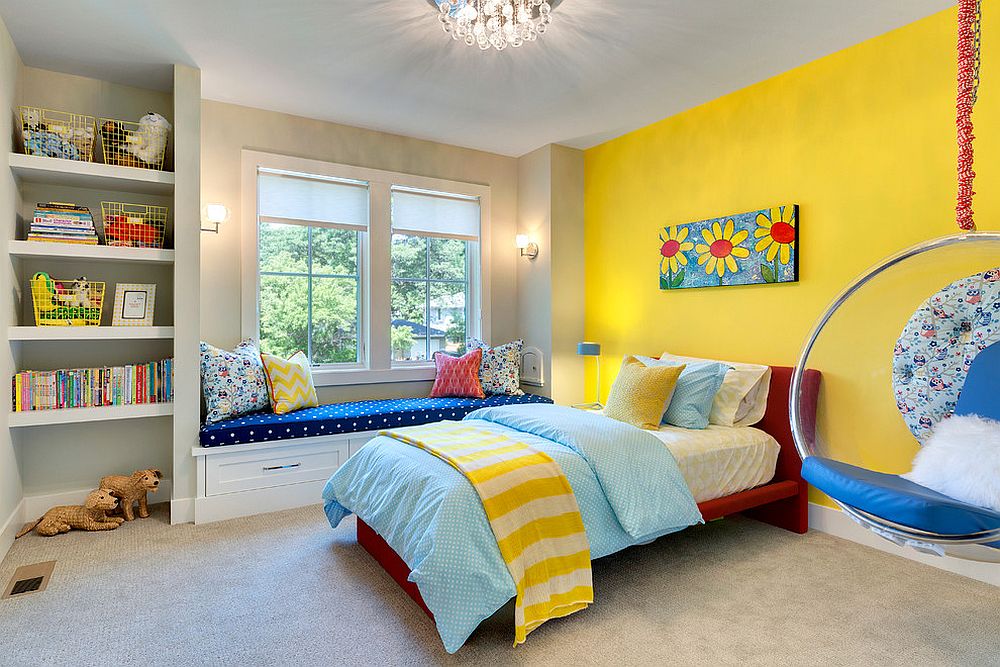 However, as with bright and warm colours like red and orange, the use of too much bright yellow could encourage anger as well as the negative behaviour that's typically associated with it (e.g. aggression). Additionally, if your child tends to have a difficult time falling asleep or getting sufficient sleep, it might be best to steer away from using yellow in their room as its bright nature could create a "daytime" vibe, of sorts, making it difficult for your child to wind down for bed.

Thus, in general, yellow would probably work best as an accent colour and when paired with other colours such as grey, blue or green. The use of a mixture of colours could help to balance out the room, allowing the positive benefits of yellow to shine through whilst keeping its negative effects at bay. 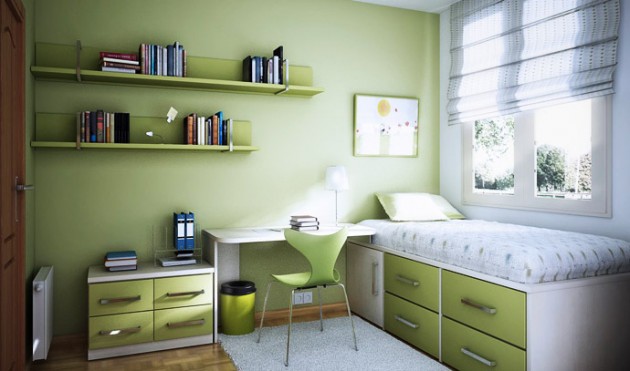 A colour of nature, green has been demonstrated to be a colour that can have a soothing and relaxing effect. Researchers have also found that it could also help with improving a child's reading ability and comprehension. So if your child's room is also the room where they'll be completing their homework in, you might thus want to go ahead with using a green colour scheme for the room.

However, as with any cool colour, the darker the shade of green, the gloomier the room will be. You might thus want to avoid darker shades like forest or pine green, which run the risk of becoming overwhelming. Instead, you might want to opt for lighter and brighter shades such as mint or tea green. 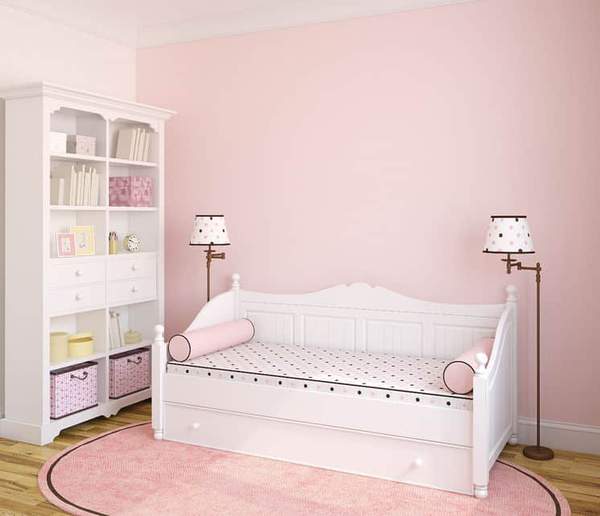 Pink is a colour that is extremely popular for kids' bedrooms, especially when designing a bedroom for daughters. Despite often being associated with girls' bedrooms, both boys and girls can certainly benefit from the calming feel of a pink room. Apart from being a calming colour, pink has also been found to encourage feelings of empathy and nurturing behaviour, helping children to develop into individuals that are caring and considerate.

However, over exposure could create feelings of irritation and contribute to feelings of nervousness. Thus, rather than painting the whole room pink, you could simply add some pops of pink (e.g. paintings, decorative items or bedding) in the room, to continue enjoying the benefits that are typically associated with it. Additionally, adding pops of pink instead of painting the whole room pink could also help to avoid a key issue that many parents face when they've painted their child's room pink — children tend to grow out of this colour rather quickly, resulting in the whole room having to be repainted.

Similar to pink, blue is a colour that's extremely popular for kids' bedrooms, and is often automatically associated with boys' bedrooms. Just like pink, both boys and girls can certainly benefit from the calming and soothing effects of this colour. Blue has been found to have an effect on lowering feelings of anxiety and aggression, making it a great choice for children who may often experience tantrums as well as other behavioural problems.

A word of caution, though, is to be careful not to go too overboard with this colour. A room that's too blue could actually have the reverse effect of creating a room that's depressing, instead of calming. So keep the use of blue in moderation. You could also balance it out with pops of yellow, or red, through the utilisation of things like bedding, paintings or curtains. Grey is a colour that has typically been found to stimulate creativity, for both adults and children. It's also a stylish colour that provides a flexible, neutral background for all your furnishings.

However, a room that only has a grey colour palette can become rather cold and depressing, making in an environment that's rather uninviting. Thus, avoid designing a room that is completely grey and try using it in moderation together with other colours like yellow, or as an accent colour instead.

Your Cart
Close
Your cart is empty
Checkout
Sorry, It seems like some items in your cart are no longer available.
Please review your cart to proceed with order!